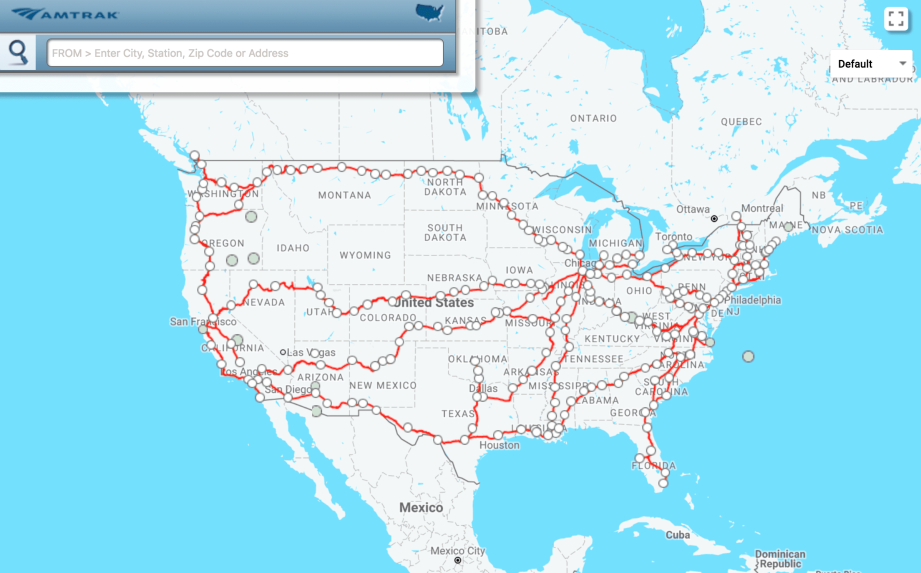 While preparing for a trip, the most exciting moment for me is the time looking at the map to choose which cities to visit and what roads to take.

For 2018 Amtrak trip, the starting point for my planning was the map that Amtrak provided on their website.  This interactive map is called ‘Amtrak Travel Planning Map.’ (***I don’t know why, but this link doesn’t seem to work in mobile devices. Will update if I can find the mobile version of the interactive map. Again, Amtrak is not the most user friendly company!)

The map is useful to kind of draw a BIG PICTURE in your head. For instance, my starting point is Boston so I could check where to the railroads extend from Boston. I could go South (to New York), North (to Maine), or to Northwest (to Chicago). I decided to go to Chicago because my final destination is Seattle and it seemed pretty reasonable to head Chicago if you look at the map (plus, I visited NY and Maine many times already.) Then from Chicago I could go further Northwest to North Dakota and Montana, but then my trip will end too soon! So I decided to go South to New Orleans…. and so on.

Really, it is just like a starting point and much more details had to be decided later. For example, I had to decided whether I would stop by Cleveland (the hometown of Indians and Cavaliers -good bye King James!-) before heading to Chicago. I decided to skip it for this trip because I had looooooooong way to go and it felt like too much time on Midwest.

My itinerary is a bit unique because I am not coming back to where I started. Well… I think every traveler is one of a kind so there might not be something like THE ‘answer sheet.’ But for a guidance, I borrowed the book <All Aboard> from the library and skimmed through it . It is a nice little guidebook that gives you a motivation and basic info about train trip (like you get free meals if you pay extra for roomette, which I will get back to later.) There seem to be a few more books about train trip like <Tourist Trains Guidebook> , but I haven’t read it yet.

<All Aboard> by Jim Loomis

These are the suggested itineraries from <All Aboard> FYI. The routes are mostly loops that one can come back to the starting points. The lovely titles of the itineraries are from the author (Jim Loomis, he runs great website about train trip in US.)

One thought on “[Amtrak US #4] Drawing the BIG PICTURE”