After eating surprisingly good free breakfast (with warm sausages, egg scrambles, grits etc.) at the Drury Inn, I went for a tour to a couple of plantations in Louisiana. There are several plantation tours offered by tour companies. I made a reservation the day before to go for Gray Line (one of the biggest tour companies it seemed) Double Plantation tour ($88.) You could choose two plantations among three on the list (Laura, Whitney, and Oak Alley.) I googled some pictures and basic info, and picked Laura and Oak Alley plantations. The tour was from 9:00 AM to 4:30 PM and the pick-up area was near the French Quarter, right beside the Mississippi pier.

The big coach bus was about 2/3 filled with tourists. 1.5 hour bus ride itself to the plantation was quite fun. The New Orleans native bus driver (interestingly without the accent though) was also a very good tour guide, telling us various interesting stories about New Orleans with his headset microphone (something like that New Orleans people call an avocado ‘alligator pear.’) The view of Mississippi river, the second longest river in the world after Nile (according to the driver, fourth longest river according to Wikipedia,) through the bus window was stunning.

Mississippi River from the tour bus to the plantations

The first stop was Laura plantation. About 10 minutes after the bus dropping us off, the tour guide walked us through the plantation. Laura plantation is a typical creole sugar plantation that was happened to be run by women most of the time. I had been confused about the word ‘creole’ that was being used everywhere in New Orleans, from food to housing, and the guide finally made it clear for me. The term means people who are ‘French speaking (doesn’t need to be a French), Louisiana born (regardless of ethnicity), and Catholic.’ 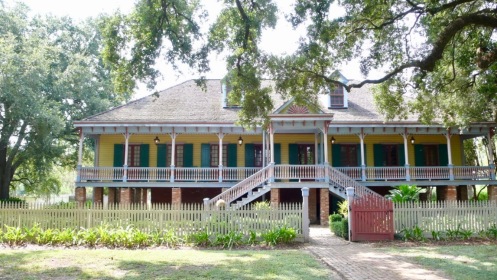 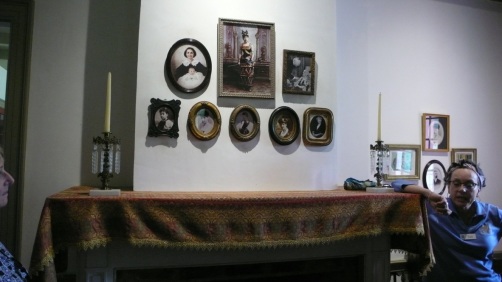 A pot that was used to purify sugar in Laura Plantation

After about 1.5 hours at Laura plantation, the bus drivers picked us up again and headed to the next plantation, Oak Alley (15 mins drive.) Oak Alley plantation is one of those very photogenic spots that make you shout out ‘OMG, I must go there!’ The real thing was no less than the pictures in the internet. Big oak tree branches were making a beautiful entranceway to the front door of the main building.

There was a restaurant in one of the buildings inside the plantation complex, so I had a quick lunch there. They served mostly traditional Louisiana meals in a cozy atmosphere.  We had chicken+smoked sausage gumbo ($9.95) and fried oyster poboy royale ($14.95.)

After the lunch, the tour guide of the plantation walked us through the main house. Contrast to the beautiful scenery, we of course learned about the painful history of slavery embedded in the plantation. It was also a little bit sad to learn that the family who owned this beautiful plantation couldn’t hold it for more than two generations due to mis-judgement on some investments. 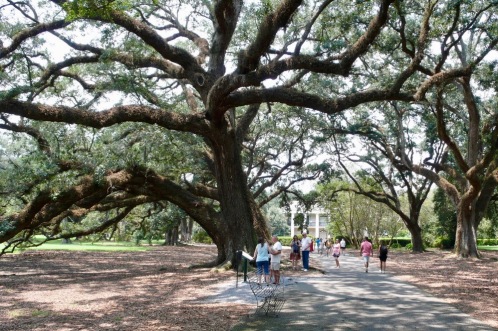 After coming back to New Orleans by the same bus, it was a time for an early dinner. The day before, I reserved the famous Natchez steamboat cruise ($48, without dinner) that goes up and down the Mississippi River and the boat was to leave at 7:00 PM. There was an option to eat dinner on the boat ($83, including the cruise) but eating something on the boat wasn’t my thing, so I went for a dinner before the cruise. There were still several things left on my list of ‘ten things I must eat in New Orleans’ and I was to leave the day after, so I felt like I should hurry.

I went to Pier 424 Seafood Market for the dinner because they had boiled crawfish on the menu. However, I was disappointedly told it was not the season. I tried boiled jumbo shrimp with potatoes and corns (MP, around $30 I think I paid) and fried alligator ($12, tasted like chicken)  instead. Big dishes of fresh seafoods were satisfying enough.

After the dinner, I finally headed for the cruise, the famous steamboat that had been hosting various people since 1823. The current boat is the ninth generation of Natchez, cruising since 1975. The jazz band was already playing on the boat. The vibe was lively while the boat cruised into the sunset. My last night of New Orleans was passing with the tune of jazz and the sound of the steamboat foghorn.

The boat brought us back to the land at around 9:00 PM. For the last sprinkle of New Orleans, I headed to the casual outdoor jazz bar in the middle of French Quarter. Cafe Beignet at Bourbon St. was located in the Musical Legends Park. The tiny park is famous for the three statues of jazz legends standing near the gate (Al “Jumbo” Hirt, Antoine “Fats” Domino, and Pete Fountain.) And of course, there was a live jazz being played in the middle of the courtyard. The wind was still warm as the sound of live jazz danced through the night air.